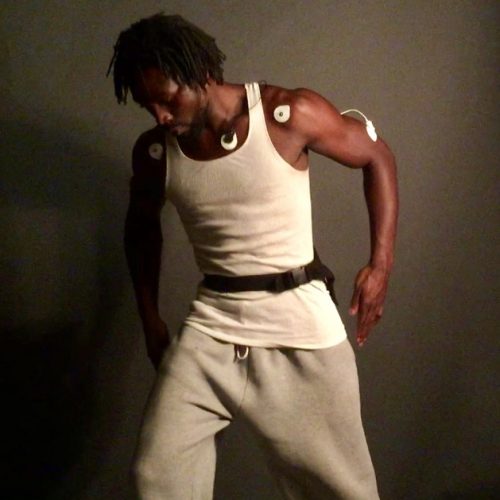 The Body Biopotential Sonification art project explores the idea of human nervous system expression in a movement / dance setting. A participant movement artist’s biopotentials are monitored and the measured electricity, sourced from the artist body’s physical activity, is greatly amplified and then conditioned and presented as a real-time soundtrack.

The Body Biopotential Sonification art project enables participants to create a musical composition that’s sourced from each individual’s physiology. The expression becomes a language for the combined physiology of the individual or assembled group.

The Body Biopotential Sonification art project electronics sensing, amplification and processing design signal flow is implemented via analog electronics. There is no data transmission time-buffering employed, so signal latency and jitter are at the extremely low levels afforded by direct analog design. Physiological metrics are measured, transformed, and then re-introduced in real-time as auditory stimuli to the participant movement artist(s) and audience.

Manner of Relevance – Perception and Judgement

The Body Biopotential Sonification art project employs advanced biometric technology to allow the subtle signals generated by the human heart and skeletal muscle to become audible.  The heart’s behavior is influenced by the autonomic (sympathetic and parasympathetic) nervous system. Sympathetic stimulation speeds up the heart and parasympathetic stimulation slows it down. The heart’s behavior is a reflection of processes that moderate our bodies, brains, thoughts and actions. Conversely, skeletal muscle is largely subject to non-autonomic (voluntary) control.

The nature of perception is that sensory data begins to arrive to the awareness of the brain in approximately 100ms. This data is still exogenous, meaning its nature is before thought and is subject to the physics of sensory perception, filtering, propagation and translation. Once the sensory data is absorbed by the brain, it’s considered endogenous, and then there is a steady layering of consideration from 100ms to 600ms. Between 100ms and 600ms, after the data passes the exogenous/endogenous boundary, the sensory data routing through the brain activates memory and other forms of information flow networks subject to previous experience, the later represented as a range of developed structural frameworks. These later, endogenous, elements ultimately allow for the establishment of human judgement. It takes a person at least 600ms to “make up their mind”. Prior to judgement, when the sensory data is processed in the endogenous phase, the layering of consideration activates the sympathetic and parasympathetic nervous systems, preparing the individual for what might happen. Cognitive-based, voluntary control of skeletal muscle occurs after this endogenous processing.

The Body Biopotential Sonification art project allows for exploration of this endogenous time period, that being “prior to judgement”, and gives a voice and a language to this personal and shared human quality. Concurrently, the Body Biopotential Sonification art project provides a different voice to the non-autonomic, voluntary, control of skeletal muscle. The “mirrored resonance” between autonomic and non-autonomic qualities of human physiological expression are reflected in the real-time generated soundtrack. The resonances occur across two different domains, one being the interchange from endogenous processing to specific action of the body, and the other being the recursive effects of the body immersed within, and simultaneously generating, the sonic environment. 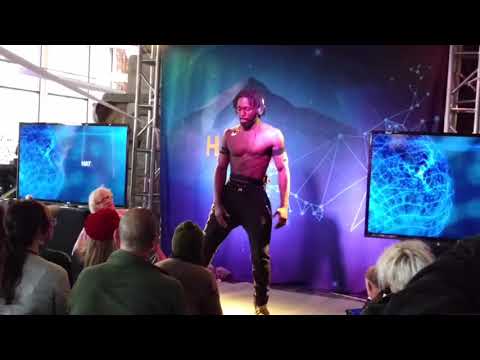